The animation above shows the development of artificial intelligence since 1969 for all companies and research institutions worldwide. Based on the countries of origin, they are assigned to a continent. The new patent applications for the current year are shown. It can be seen that artificial intelligence technology was initially strongly driven by Asia, especially Japan. The USA gained momentum around 1990 and overtook Asia around 2000. In 2010 Asia strengthened, this time driven by China. Overall, the number of patents in artificial intelligence is increasing significantly.

However, this representation of the pure patent volume in terms of new applications is not particularly meaningful. Instead of patent applications, an analysis of the entire active patent portfolio at a certain point in time makes more sense. In addition, a distinction should be made between patent volume and patent quality. A click on the button “Separate world-class in 2017” shows the active patent portfolio for all companies and institutions in 2017 and also separates the high-quality world-class patents from the pure patent quantity. It shows that the USA is clearly leading in this presentation of the currently really relevant and high-quality patents.

The new EconSight short study on “artificial intelligence” has been published. 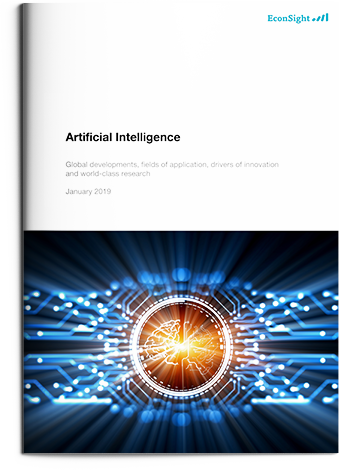 Order the study free of charge (English / German) via our shop system. You will receive the study as a PDF download within a few minutes.